written by Judita Matyasova
excerpt from new book, which will be released in Czech version in autumn 2013

This girl just keeps smiling. I can see the very same smile in her face as in her photographs from the family album. I can see her smile today, too. Dita Persson (née Kraus) is almost ninety years old. She is showing me one photo after another, smiling whenever she remembers a story from her childhood she spent in the center of Prague. For seventy years, she has lived far from home, in a Swedish village called Förslöv. Still, she tells me her life story in perfect Czech. 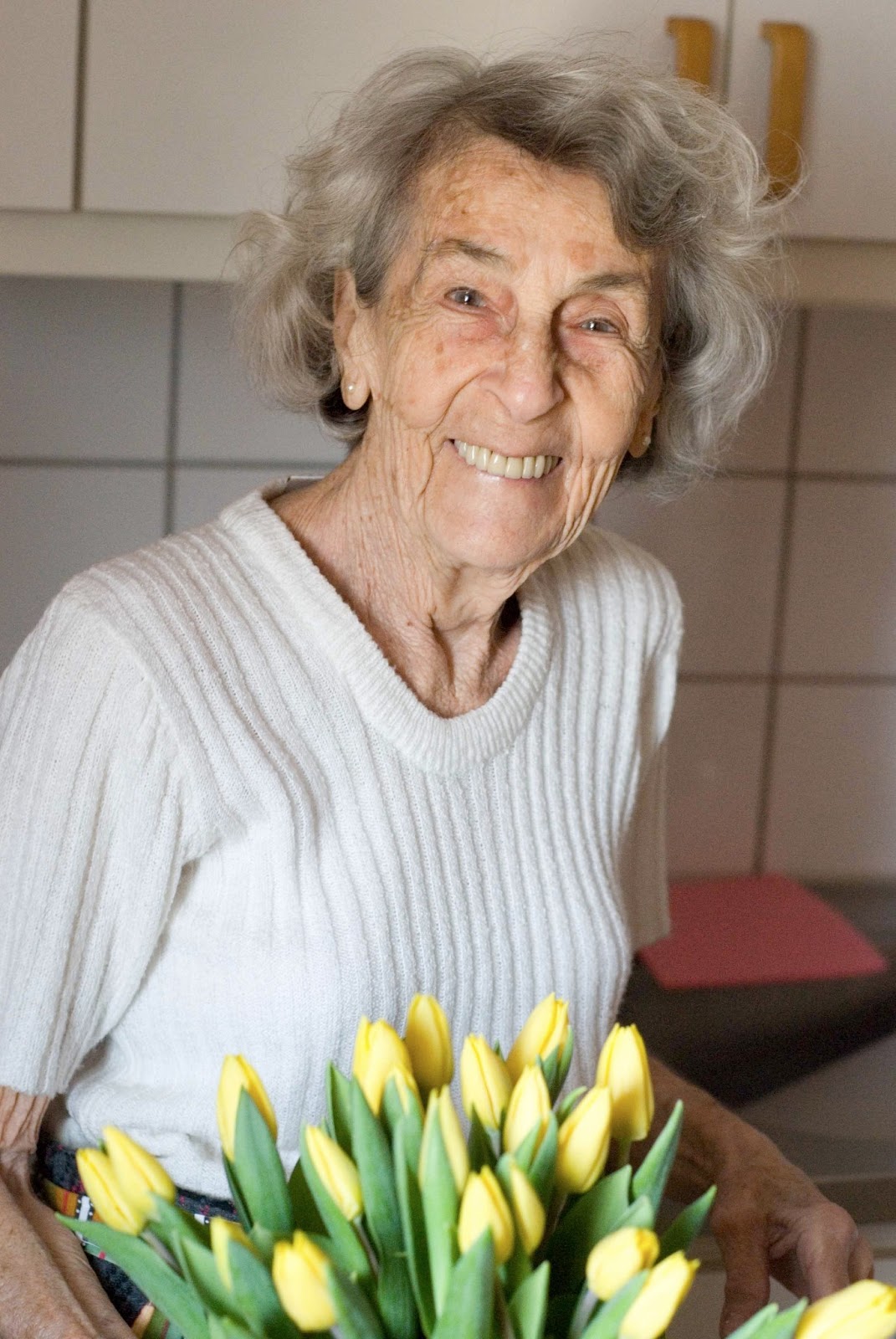 Dita grew up in Prague, not far from the Old Town Square. She lived in a house called Great Operetta. On the walls downstairs were posters advertising the evening shows and during the day one could hear singers rehearsing for their performances. The house was one big maze; in the morning Dita would leave through one passage to go to school, in the afternoon she would return through another one, to see Daddy in his tailor’s shop; in her free time, she would attend gymnastics classes. “I always loved sports and still do. I used to attend Makkabi Hacair, (Zionist youth classes – editor’s note). There were many friends of mine, my cousins Slávka and Valda Jeiteles and also Hanka Dubová. We learned that Palestine was our land where we could go to work in a kibbutz. That was our dream which might come true one day. But things changed when Germans came here. Suddenly, a journey to Palestine turned out to be one of the ways of escaping. Fleeing far away from the Nazis. I wanted to enroll in the alíjá school (preparatory classes for emigrating to Palestine – editor’s note) but my parents were not as excited by such an idea. For me it was a chance to be with my peers and to experience something new. Moreover, I believed that my parents would soon join me abroad. In the end I persuaded them and in May 1939 began to go to alíjá school in Prague.

The summer passed quickly and then things went fast. Our teachers told us that considering the political situation in Czechoslovakia we could not continue our classes there. They found foster families for us in Denmark. We were supposed to spend a short time there and then go on to Palestine. Germans issued passports for us, as if they wanted to expedite our departure. But those passports were of somewhat one-way sort. We had to hand in all our money and valuables. I only travelled with a small suitcase with the essential things. My parents then packed comforters, clothes and shoes into a large wooden trunk which they sent to Denmark. Mommy lined it with waxed paper and folded everything very neatly. She had several summer dresses made for me because she thought that Denmark would only be a transit station for me. Who could guess that we would stay there for four years and never reach Palestine…”

On the sea for the first time
Midnight, 24th October 1939. The last hours before departure. Children are gathering on a platform at Masaryk Train Station in Prague. They are excited about travelling together with their pals. Parents are standing aside, watching them. These children act so grown-up, ready to face life. It feels like letting a young bird leave the nest for the first time; it can hardly fly but wants to try so badly. The train begins to move. Children are waving and the parents on the platform are trying hard to smile. They believe they have done  the best for their children. They are sending them to safety and have to believe that this is only temporary. This parting is final, though.

The journey through chilly night goes fast. Dita and her friends are chatting, singing and nodding off every now and then. Before they know it, they are in Berlin. Dita grabs her suitcase and gets off with others. They take the underground to get to another station. The next train takes them all the way to a small harbor town called Warnemünde. For the first time they are for the first time on the sea, the ferry taking them to their destination – Denmark. After two more hours on the train they arrive in Copenhagen, to spend one night before moving on. In this foreign country, everything is suddenly unfamiliar, even the beds. Everything is now unfamiliar, except for their pals.

“Each of you will go to another family, to another place,” Anne-Marie Nielsen explains. (Nielsen represented the Peace and Freedom League which secured foster families for the children in Denmark – editor’s note). A wave of disappointment, of anger perhaps. How could this happen? We wanted to be together! But that is not possible due to safety reasons. Too many Jewish children in one place might provoke suspicion.

Dita and her friends got each a piece of paper with the name of their village on it. They are going by train, watching the landscape outside. It is so different from Czech countryside. This one is so incredibly mellow. No hills, no mountains, no forests. Just green and grey plains, with a farmhouse every here and there. “My piece of paper said Rislev. Mrs Nielsen told me to say goodbye to my friends. I got off at a station with just a tin shelter, looking out for my foster parents. There was no-one. Just me and the fields stretching far, not a single house to be seen. I didn’t know what to do. Where to go? That was a terrible moment, being alone, so far from home. After about an hour, another train came and three girls got off. I tried to speak German to them and one of them responded: ‘You must be the one that’s supposed to come to our place today.’ Things became clear then: their parents were waiting for me in another village. This girl took me to their farm called Nielsminde, walking her bike along,” Dita, who is now eighty-eight, remembers.

No time to write
A large farmhouse. A room with one bed, one shelf and a window looking out on a dusty road. This is now Dita’s world. She has to get used to a strict order observed by the Danish household. She did all the jobs that were needed. “Sitting in school in Prague was such a drag, while working in the fields was quite a different thing. I enjoyed it so much. Feeding the chickens, cooking lunch, taking care of children, cleaning up the kitchen. And in the evening I hit the sack. There was no time for sorrows. Only at the beginning I felt homesick when I read letters from home. My parents would go on why I wrote to them so little. How could I? I was run off my feet all day. Only many years later I would realize what my letters had meant to them. It was only through the letters that they knew I was safe and sound,” Dita says.

Messages from home arrive several times a week. The postman stops by the farm and Dita opens another letter. Mommy keeps worrying about the freezing cold in Denmark. Yes, it is freezing, it is the hardest winter in the last forty years but Dita does not mention this in her letters. She much rather describes how she goes to the fields at five in the morning, harvesting beets. “I didn’t even have proper trousers, just thin tights. We didn’t have much stuff, let alone money, but I was not bothered by that. I was having a good time in Denmark, except of the food. Their eating is somewhat upside down; for instance, we have potatoes, sauce and meat, while they have it the other way round. They have a piece of bread and then cold fish. I had to get used to it but that was no problem. When you come from elsewhere, you have to adjust. We didn’t dwell on these things. We hoped we would soon leave and that kept us going, it was a consolation for me and my peers.”

Another escape
Time in Denmark would pass quickly, to the rhythm of everyday chores, until October 1943 when the Nazis decided to get hold of all Jews residing in Denmark. “Someone from the village warned me, told me I had to leave at once. I grabbed a few things and was gone. I kept pedaling, on and on, all the way to the coast. I ran into a few friends on my way. When we reached one fishing village, we saw lots of people there. They all wanted to flee. We had to pay and only then the fishermen would take us onboard. We survived the twelve-hour journey, squished underdeck (usually, the journey from Denmark to Sweden takes an hour; it took so long because of Nazi patrols on the sea back then – editor’s note).

I found a job in Hedemora, working on a farm again, just like my friends who rented a former rural schoolhouse where they stayed together. I felt, however, that I would prefer another kind of job. I had always been involved with children. So I found myself a job as a children’s nurse in Helsingborg hospital. In summer 1945 I went to Ramlösa, a spa where concentration camp survivors were recovering. They needed someone who could translate from Polish. I couldn’t speak Polish but that was no problem, Czech and Polish are similar. After two months I found a job in a kindergarten in Helsingborg and then things went fast. I met my future husband, Ragnar. He is Catholic and he had little idea about Judaism. And Bohemia? None at all! But that didn’t matter. We got married in 1951, then children came and all the things which kept us busy.

I only found out after the war what had happened with my folks. I could not believe that they had all died, even my younger brother. The only ones that survived were my aunt and cousin. I could not return to Czechoslovakia for years because of the Communists. It was only in the late 1950s that I could visit. We could feel the lack of freedom in Czechoslovakia; Communists were checking every single foreigner. In 1989 the Communist regime fell and this was all over. That was beautiful,” Dita smiles and plays a song on the piano, a tune she remembers from home, from the Great Operetta.


Here are few photos of Dita with our film crew, filming in Rislev nearby Naestved. Photos by Rachael Cerrotti 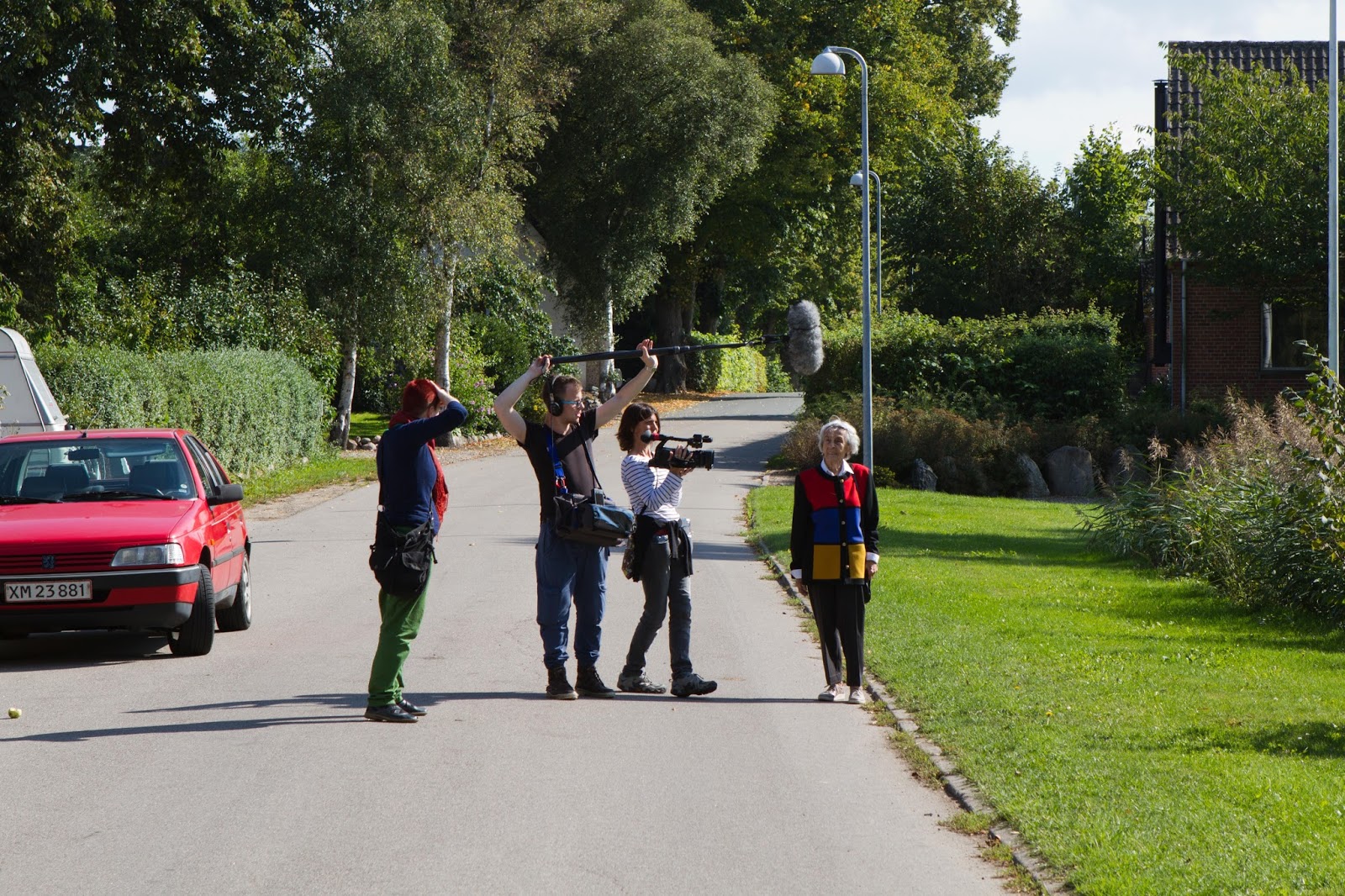 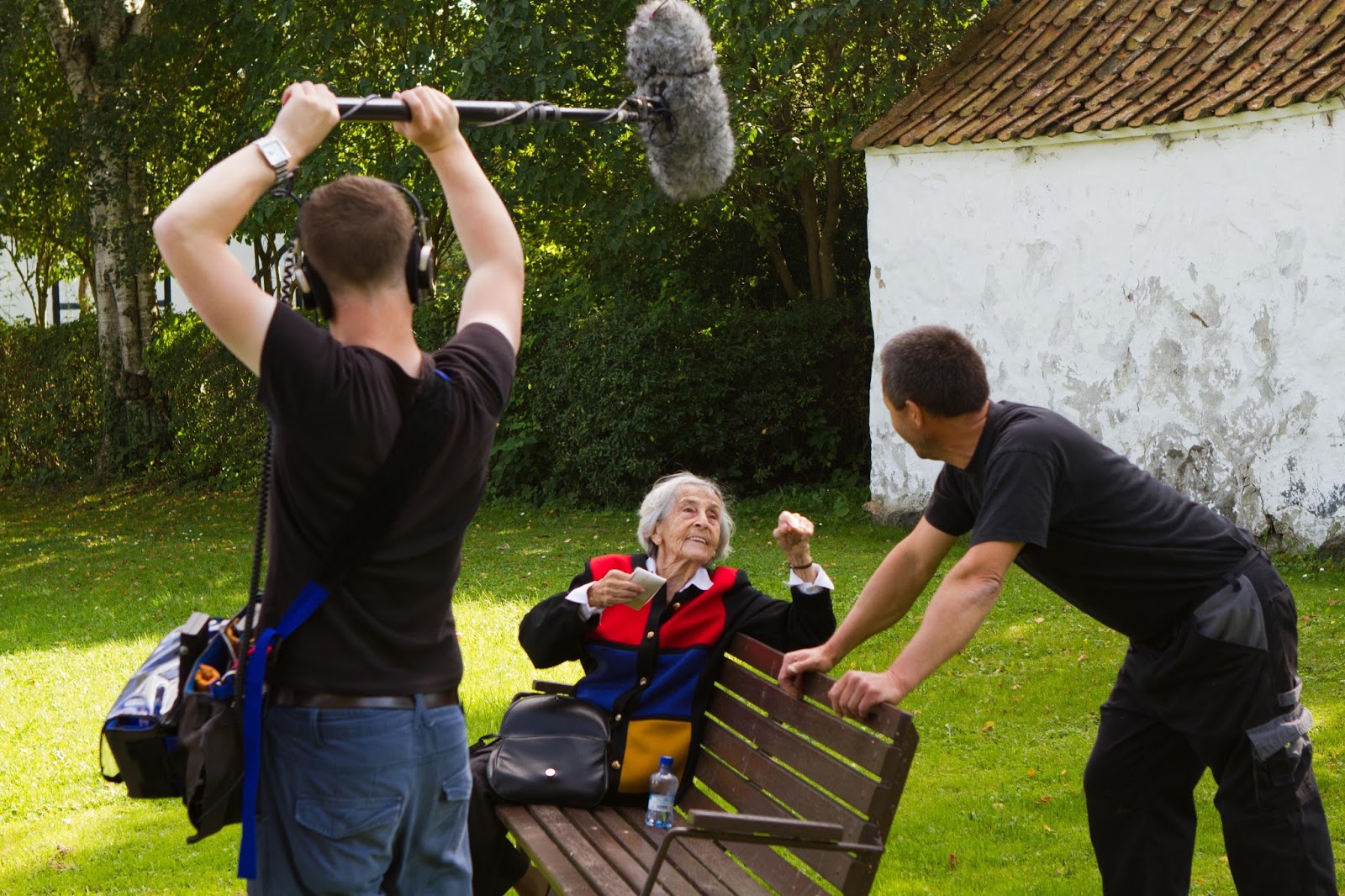 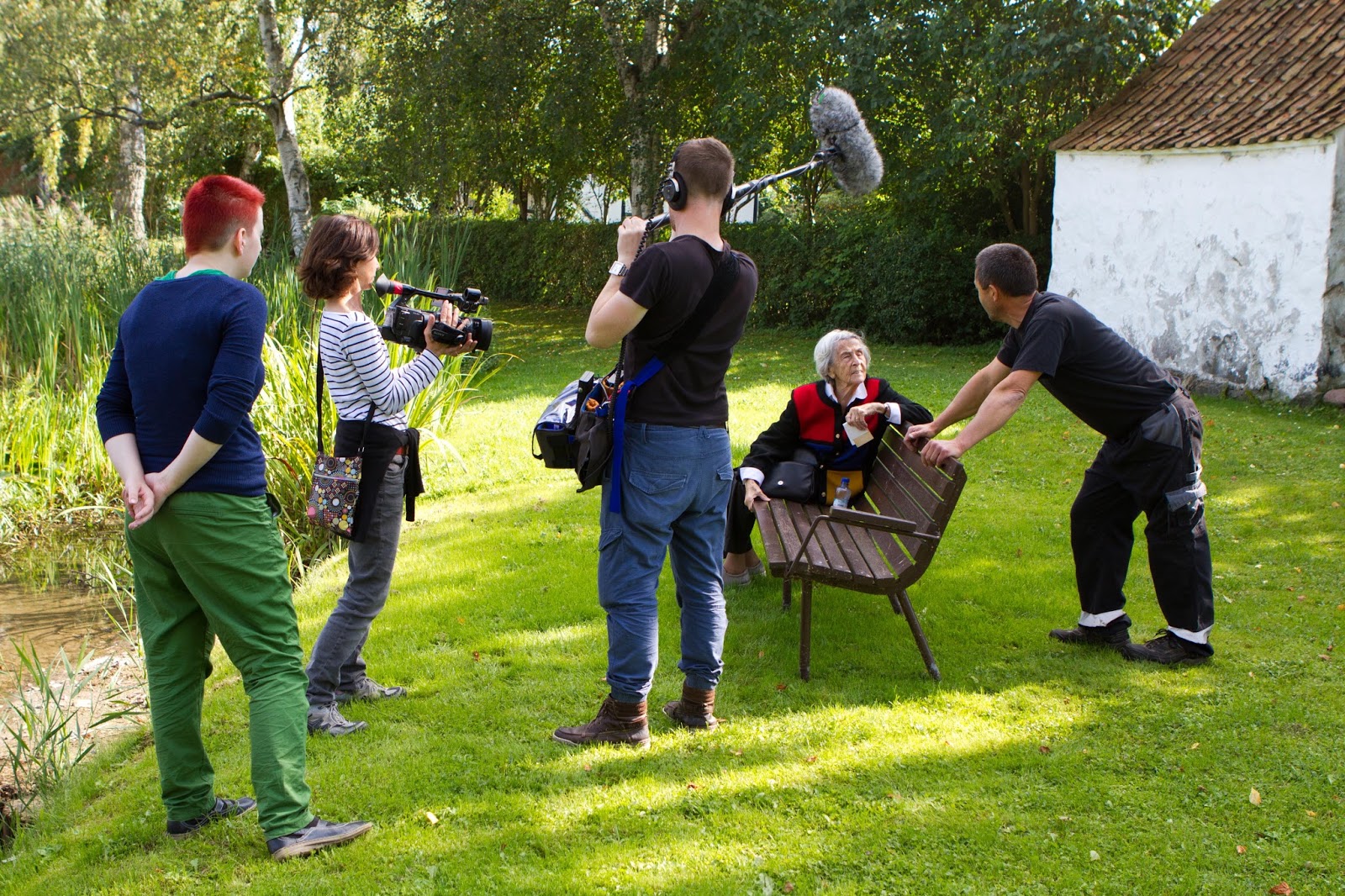 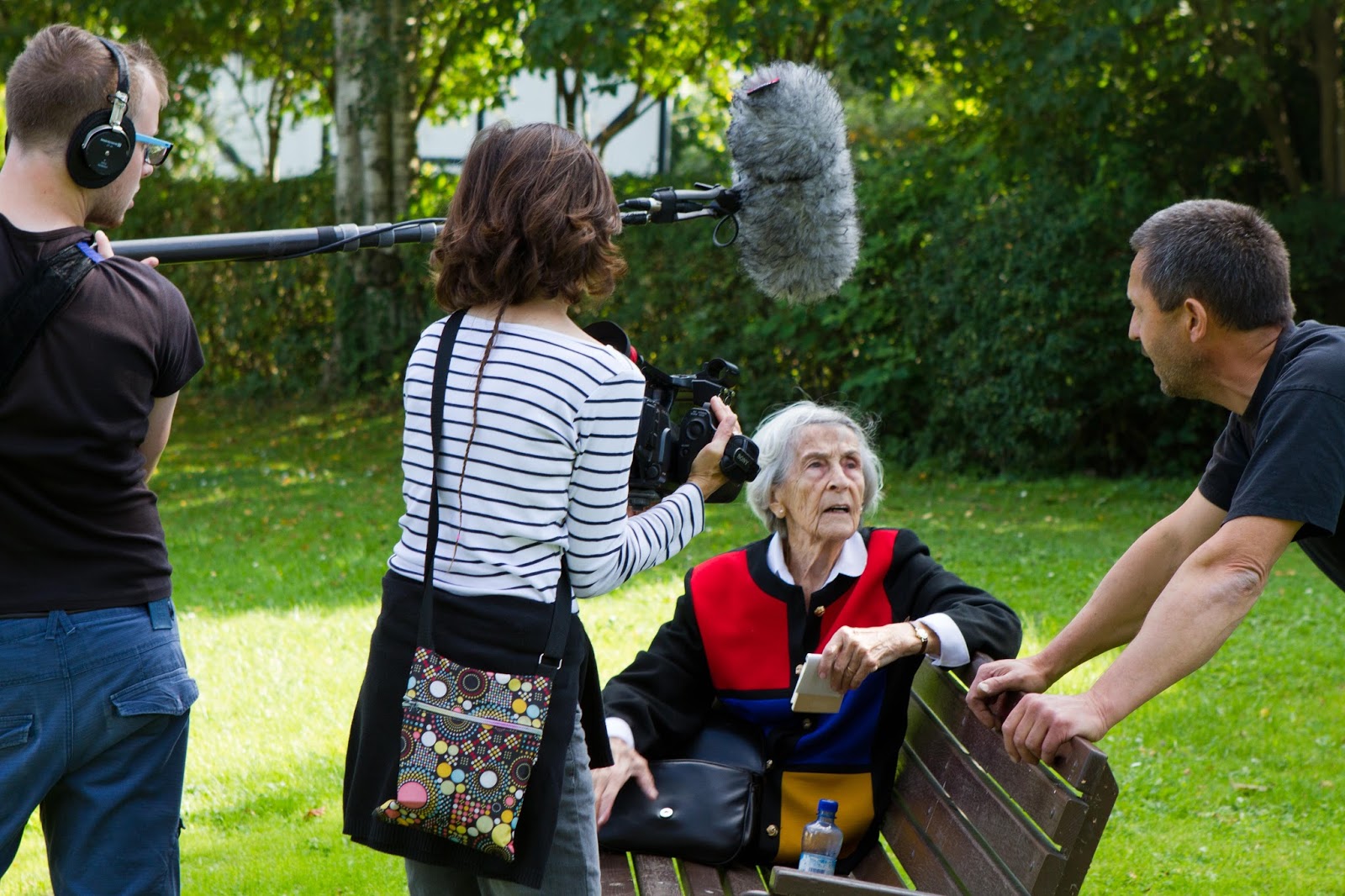 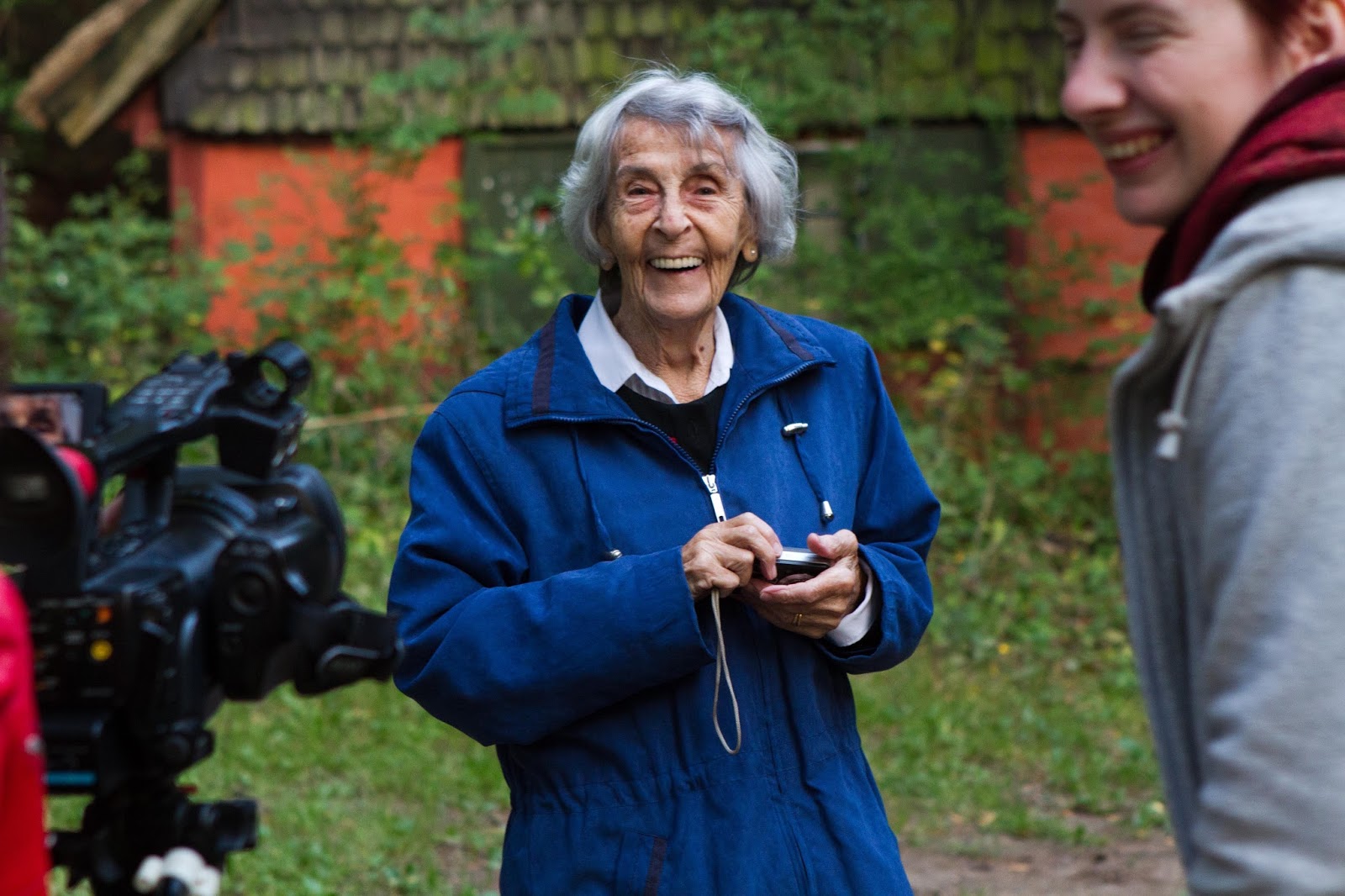 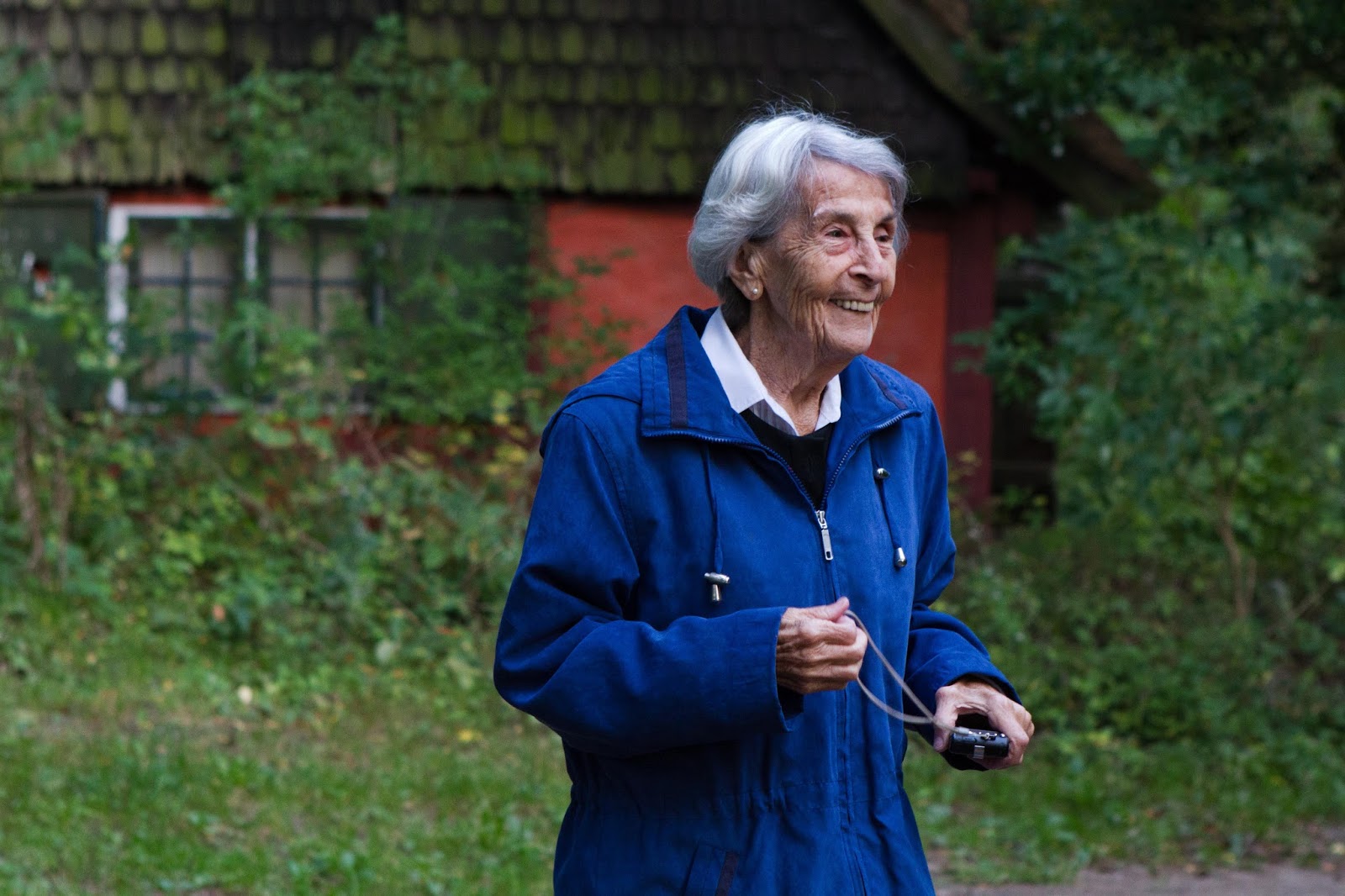 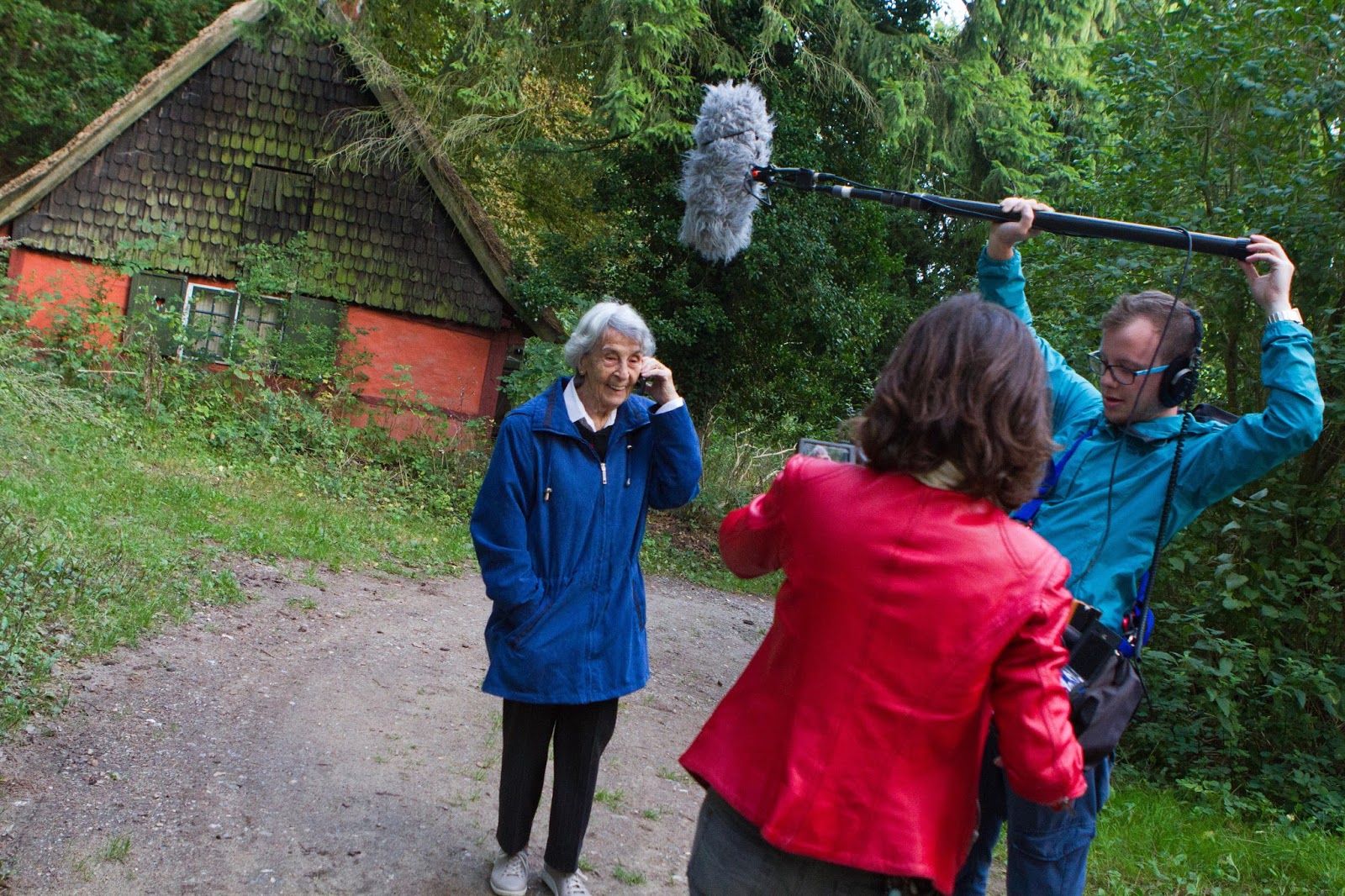