One Face, Too Many Stories

Sometimes I spend months exploring a  story and imagining the face of the person in the story. What are the eyes like, what does she look like when she smiles? Finally I see the face in the corner of a passport or a school photo and the story and picture connect for me. 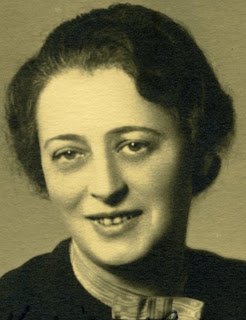 This time, I found the face of Marianna, the mother of one of the children who was saved during the war. Yesterday I found out what her story was. I was aware that in the past it was not easy for women to have a career. Many women had the dream, but very few were able to achieve it and become independent. The norm was that women at that time stayed home as housewives.
Yesterday the daughter of Marianna spoke to me for the first time about her story. “ My mother was different from the others. She married at the age of thirty four, which at that time was considered very late. But she was extremely independent and in her twenties she became a master tailor and started her own salon. She had a large apartment near the old town square in Prague with one room serving as a workroom and another used to meet with lady customers. She had five seamstresses working for her and they would make dresses to order. Ladies would show her pictures from French fashion magazines and she and her team would create the dresses. She was very talented and creative and she loved her work.
Marianna was too busy to date but one day she saw an ad in the paper. Max Federer was over forty, a Doctor of Chemistry and looking for a bride. He was offering to meet a lady and so she decided to answer the ad. So Marianna met him at a café wearing a red rose for identification. Her friend came with her and hid nearby to make sure she was safe. The meeting was a success and they married a month later. A year later their daughter Ann was born and was called Nemka by everyone.
Marianna was extremely busy and had to hire extra help to make everything work. Still, it became too much and she and Max decided to close the salon.

In the 1936 census, Marianna was listed as a housewife. A few years later that didn’t matter. The thing that did matter was the letter “J”- Jude beside their names.

In 1939 Marianna and Max managed to send their daughter Nemka, who was now fourteen, to Denmark for safety. Every week they were able to send letters to Nemka, but in 1942 Nemka received one last letter. It was a hastily written message. “ We’re going to Terezin, do not worry about us.” No other letters were ever received.

Nemka looked out the window at the peaceful life in Naestved, Denmark and it seemed so quiet and normal. The only person who understood how she felt was Carl, a friend also from Czechoslovakia. They shared a common bond and then the next seventy years together.
The first time I spoke to Ann Steiner was in January of 2012. She lives in a small town in Ontario, Canada. I wanted to contact her earlier but hesitated. Her husband Carl died half a year before and I thought it was too early to remember the times when they first met. When I did contact her, she was pleased and willing to share her memories of the past. Then she said, “You know, I don’t really know what happened to my parents; I am aware that they didn’t survive. They were in Terezin and may have been sent somewhere in Estonia.”
I ask myself, “ But is it good to know? How much and with how many details?”
I ask her, “Do you really want to know?”

“I think there might be something in the film by Lukas Pribyl, Forgotten Transports to Estonia.

I send Nemka the message that there is a film and also an historical study.

Nemka writes, “ What is on the film? Are my parents there?”

I watch the film and look at the story of the transport of thousands of people. A few days in Terezen and then on the train to Estonia. Just a common place, nothing special. They get off the train. They are told,”Older people left, younger people right.” The older ones are by a deep pit. There is continuous shooting and piles and piles of corpses.
There is also an historical study about the transport which is very detailed and factual. It is very difficult for me to read the first page. I think of Marianna, I think of that face. I think of a beautiful mother holding her daughter. It is hard to turn the page. Photos of the piles of bodies: legs, arms. Maybe Marianna is lying there. It is not just some bones and skin; they are people who had names and dreams and destinies. 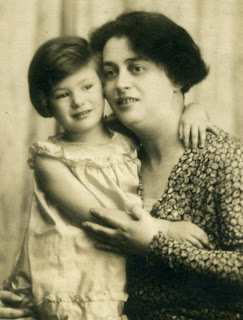 Now, what to do? Should I send the book and film to Nemka? I struggle over what to do for three days.

“Dear Nemka”, I start to write but don’t know how to continue. “ Dear Nemka, I read a few pages from the book and I couldn’t read anymore. The film, I couldn’t watch it.’

She writes back, “ I understand, don’t send it.”

I look at the face of Marianna and I want her story to be remembered.